With the success of the first restaurant in Arlington, the Dang brothers opened a second location in Centreville. In 2014, the brothers realized the advantages of Fast-Casual restaurants and began to build out Roll Play Vietnamese Grill, Teas’n You Fusion Tea House, and Lei’d Hawaiian Poke. All concepts are currently open, with Roll Play being the highest Yelp-rated Restaurant and Teas’n You being the highest Yelp-rated Café in Tysons.

In 2007, Di and Hac played high-stakes online card games and did so well that it became their full-time job. In about 5 years playing, the brothers pooled more than $20 million. After realizing that online poker wouldn’t be a long term option, the brothers used their winnings to invest in their first full-service restaurant, Chasin’ Tails, a Cajun style seafood restaurant that reminded them of the backyard crawfish boils that they experienced growing up in Louisiana.

HEH focuses on the purpose of empowering fulfillment. HEH’s goal is to provide the onus to help one another to move up “Maslow’s Hierarchy of Needs”, no matter where they currently are in their lives. To uphold our culture, HEH lives by our core values:

Genuinely care AND directly challenge teammates to help them improve. Don’t sacrifice clarity for kindness. Be open and honest with your thoughts and feelings. Always confront teammates with feedback; never gossip.

Continuous improvement; always a student. Be open minded to feedback; it’s shown in your effort not just your words. You must be willing to step out of your comfort zone. Be adaptable.

Strive for the Win-Win

Seek solutions that benefit everyone involved. Give smartly to make the pie bigger for you and for me. Be creatively collaborative.

Radiate positive energy; it’s contagious. Be kind; be empathetic; be considerate. Don’t be arrogant; be humbly confident. Be the reason someone smiles today.

We are a restaurant group driven by people, purpose and passion. HEH focuses on the purpose of empowering fulfillment. HEH’s goal is to provide the onus to help one another to move up “Maslow’s Hierarchy of Needs”, no matter where they currently are in their lives. To uphold our culture, HEH lives by our core values: “Radical Candor”, “Always Learn & Grow”, “Strive for the Win-Win” and “Spread Good Vibes.”

After being the beloved destination for seafood for the past decade, Chasin’ Tails has evolved to be a “seafood social” because we believe food is better when it’s shared with great company. Call them a “court” or a squad, either way we invite them all in to feast and socialize.

The same RollPlay that we love with more attitude! We fell in love with our family’s food a long time ago, but one thing that held us back from sharing it was how long it took to make. The result, Roll play is a quick-service Vietnamese restaurant that’s reinvented the tradition of healthy, fresh, and tasty Vietnamese cuisine.

Teas’n You Fusion Tea House was started with a passion for tea and the desire to share homemade recipes and unique fresh fruit infusions. All drinks are made to order and are customized for the guests to their liking. Teas’n You provides its customers with quality, whole and organic ingredients that satisfy their taste buds.

Lei’D Hawaiian Poke is a fast-casual restaurant that serves the Hawaiian speciality consisting of fresh, raw fish marinated in various combinations of Asian sauces, seaweed, roe, onion, and seasonings. Customers can select one of its signature combinations or customize their own bowls.

We are a modern Asian food hall that brings the best and crave-able dishes from all of our Happy Endings brands under one kitchen. We’re about spreading good vibes and creating a paradise for your palette. We’re not just a food hall, we’re a place that brings good people together and connect over a good meal. We empower you to live a fulfilled life by choosing your own happy ending.

We have a singular purpose: to create new expressions of Viet-merican culture and cuisine that nourish the body and spirit. We elevate that experience through a modern interpretation of traditional dishes and a surreal pace that celebrates the richness of art and history of Vietnamese culture. 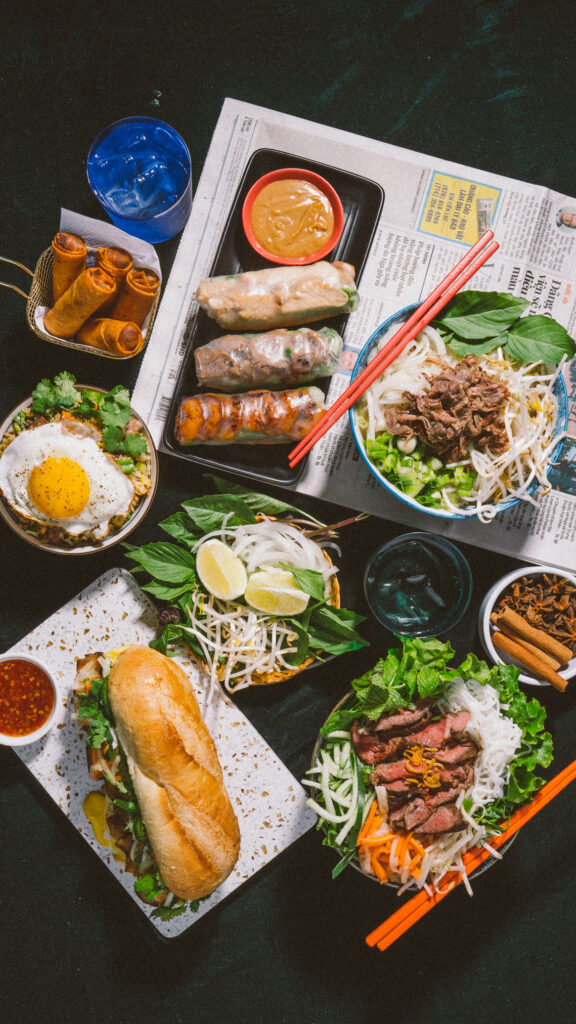